Data reflect the date crimes were reported to MPD and include all crimes reported in PSA 202 as of October 10, 2021.  Source https://dcatlas.dcgis.dc.gov

Violent and Property Crimes increased this month over last month and over September 2020. Total Crimes were 60% higher than the monthly average for this year but similar to the 2020 monthly. 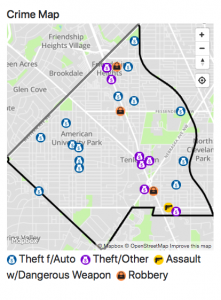