Data reflect the date crimes were reported to MPD and include all crimes reported in PSA 202 as of November 10, 2021.  Source https://dcatlas.dcgis.dc.gov

Two males, one with a crowbar, entered the businesses and stole money from the cash register. They have committed over 15 burglaries throughout DC. There is a person of interest in these cases, but no arrests have been made thus far. 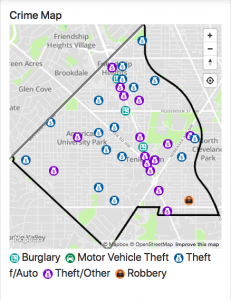