Data reflect the date crimes were reported to MPD and include all crimes reported in PSA 202 as of July 14, 2022.  Source https://dcatlas.dcgis.dc.gov

Crimes reported in June 2022 were similar to those reported last month and similar to the average number for all crimes, violent crimes, and property crimes since March 2020 (when the pandemic began). Total Crimes this month were 27% lower than the monthly average from Jan 2015 – June 2022.

Assault with a Dangerous Weapon (1 Total) 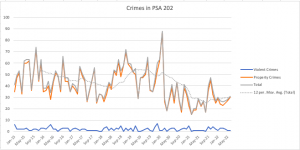